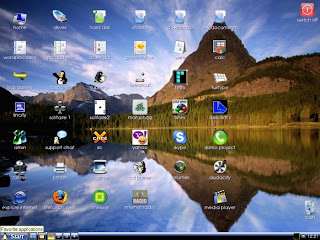 A Screen Shot of Puppy Linux

At first, glance, however, the idea of creating a computer lab seems insane. It seems like it would involve a ton of fundraising and grant-writing and gaining district approval. However, the reality is that teachers can create an inexpensive computer lab on a shoe string budget. Here's why:

It's not hard to find donated computers. In fact, there is a grant teachers occasionally write their own that is available at Computers for Learning. The reality is that most teachers know twenty to thirty people who have old computers . . . or at least who could spread the news. Schools can be sketchy about accepting donations. However, it's possible to avoid the donation (and tax write-off) if that happens. My point is that this part is often the easiest.

So, with all these old computers, there will probably be a few basic necessecities. Teachers can easily spend about fifty bucks on surge protectors and another fifty to a hundred dollars on buying switches for internet. In most districts, blue chords will be free. Thus, an entire computer lab will cost close to a hundred dollars. New teachers can probably write a Wells Fargo grant and get the entire thing covered.

I know, I know, it sounds like an abysmal failure. A bunch of computers will be running on Windows 98. But there's an axiom I've learned: Linux covers a multitude of sins. Okay, maybe not sins, but certainly huge computer failures. If you don't believe me, test it out on an old computer. Download Puppy Linux or Damn Small Linux (which most Linux people now call DSL). Or, if you're computer is less than five years old, try out Ubuntu. Everything is free, so there are no site liscenes, no registration forms and no strings attached.

In terms of office, the Open Office program works really well. It's also easy to load a linux version of CMAPS for basic concept maps and the PhotoGimp program allows students to do very basic picture editing. However, in using old computers, I'm more concerned with speed and functionality. The Linux developers have done a phenomenal job in maximizing the RAM so that tasks run smoothly.

In our class, we use many of the Web 2.0 tools (blogs, wikis, Google Docs, collective concept mapping, etc.) that are all internet-based. Students are always surprised by how quickly Firefox runs on Linux. As long as it's a PC, there is an easy-to-install Flash player, which will enable students to use most sites.

I'll be posting video tutorials for creating a FreeLab within the next few weeks.

Nice post with awesome points! Can’t wait for the next one.